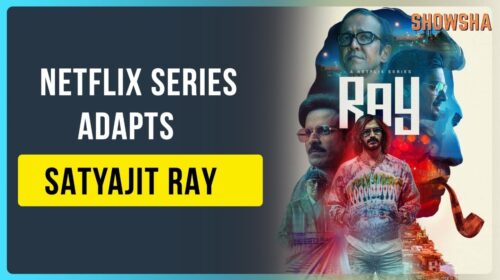 Ray is an anthology series by Netflix all the four stories inspired by Legendary Indian filmmaker Satyajit ray’s short stories. The Series is directed by Srijit Mukherjee, Vasan Bala, and Abhishek Chaubey choose four iconic Ray short stories and have transformed them into present-day stories. The story evokes ego, revenge, betrayal in a good manner.

The first episode directed by Srijit Mukherjee starring Ali Fazal as Ipsit Nair man with phenomenal memory but forgets after an incident. Ali Fazal as Man with ego plays brilliantly. . Srijit Mukherjee’s direction is good. While the story makes you gripping to the last the climax is top-notch. This episode is a good one.

The second episode directed by Srijit Mukherjee Revolves around a man working on a computer firm. But wants to a good make-up artist. The story, direction, and cinematography are such good in this episode. The acting of Kay Kay Menon is outstanding. This episode is must watch.

The third episode directed by Abhishek Chaubey is the best among the four episodes. Revolves around Musafir Ali and Aslam Baig’s Story. This Story hooked you till the last moment and stays with you for a long time. This is the best among us so you this is also a must-watch.

The fourth Story directed by Vasan Bala is the weakest among the four. Revolves around An actor who has the divine look and wherever he goes he came into the spotlight. But his spotlight steals by the Didi who has magical power. Honestly, this episode is a disaster. The premise was good. But the story didn’t work for me. Harshvvardhan Kapoor’s acting is average other Radhika Madan steals the Show.

So, In conclusion, The Acting of Manoj Bajpayee, Kay Kay Menon, and Ali Fazal are brilliant in their roles. While the direction of all of the four-episode is good you can skip the last one. The first episode is watchable 2nd and 3rd episode is must watch.

Bollywood=Remakewood.. Is Bollywood Running out of creativity?

Poster of the week